GROW OLD AND DIE YOUNG: A NATURALIST IN LIFE'S THEATER 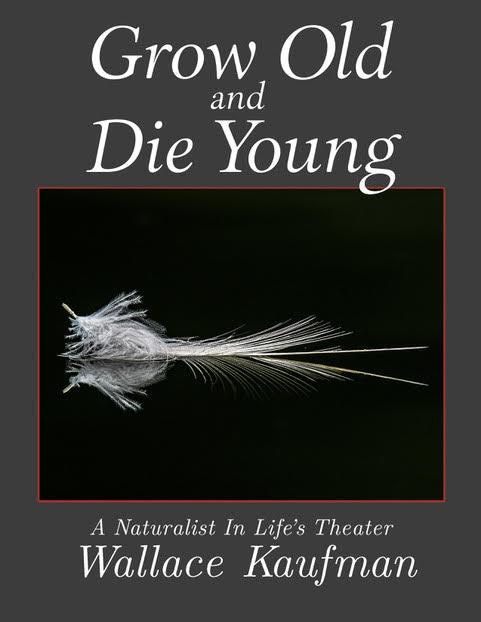 AUDIENCE
This book speaks to  three audiences. They overlap, of course. For people who love wetlands, wildlife, and wilderness, I offer this for their celebration. Second, the pictures and captions and observations thoughts and stories for people who find in nature a spiritual presence, something higher and purer than humankind. Maybe the largest audience is all of us who wonder what the meaning of life is, how to grow old—or not to, how to accept that life means death.

I came to the tidal waters of Poole Slough and to the forest and marshes around it to find something important. I brought with me my experience in many professions, my education, my wide travels in wild places, and what I have learned over many years as a science writer. Here I watch the drama of tides and weather, sun and fog life and death the way anyone watches a play by Shakespeare, Ibsen, or Chekhov. In this drama I’ve found the answers I need to understand nature, our place in it, and why I exist. I invite the reader to join me. That’s why the prologue is “You Come Too.”

WHAT IS THIS BOOK ABOUT:
You know the deep-rooted adage that two people fall in love and become as one. Each individual mirrors the passion of the other. We feel the truth of this oneness when we lose a loved one and we feel a piece of us is gone. So, how can we say we love nature when nature shows no love for us, does not acknowledge either our cruelty or our kindness? The answer is a paradox. We are one of millions of forms life takes. We are made of the same molecules and atoms as lifeless mountains, clouds, and oceans, stars and comets. Yet we are  uniquely different because we are conscious, because we can remember the past and imagine the future, and because we can love. And only when we can fall in love with the world that does not love us back, the world that will ultimately consume us, only then do we fully realize our  most positive human power.

On a practical level, the book fits in the wetlands preservation effort anywhere wetlands exist. Thousands of scientific and media articles and books have explained the importance of wetlands in economic and environmental terms. Ultimately, we will pay attention to these reasoned facts and act on them for one reason only—because we care. We’ll care because we come to recognize these places offer more than biology; more than costs and benefits.  We want to preserve what we love. Grow Old And Die Young is that necessary love story. Through the story of a man who has traveled much of the world and seen its achievements and tragedies, this story connects the soggy, muddy, salty, marshy, mosquito clouded, and subtly beautiful world of coastal wetlands to every human heart.

The hunt for foxp5

Where will our rapidly growing powers of sequencing and manipulating genes take the human species? The ethical questions at the heart of FOXP5 are becoming more urgent--not every year but every month.

Among the 7 billion of us on the planet how many have had mutations that could have changed the entire species? Not every useful mutation survives and spreads. Suppose a scientist sets out on a quest to find and apply unique and world-changing new genes?

These questions and many more play out in the characters of this story.  The players are scientists, priests and nuns, politicians, high school students, CIA agents, and more. The story begins in Africa and spreads to Oregon and to Kazakhstan in Central Asia.

Three years ago my undergraduate roommate called me and suggested that we collaborate on a novel. At Duke that tall, loose  limbed, soft spoken and rather cloistered boy from Westerville, Ohio had won the admiration of professors of chemistry and biology, and he had been deep underground exploring the reaches caves in Ohio that had never been seen before. I was earning my varsity letter in soccer, editing the literary magazine, and buzzing around campus and Durham on my motorcycle.

We stayed in touch. David Deamer pursued his career as an astro-biologist and bio-molecular engineer, eventually being co-creator of the most widely used gene sequencing concept and technology. The Swiss science publisher, Springer, took an early interest in the book for its small but prestigious science fiction list. Springer scheduled publication for the summer of 2016.

from Popular Science:
I've read a good few novels that attempt to provide edutainment - to work as a good story while simultaneously providing the reader with the kind of interesting information about science you might find in a popular science book. Most don't work at all. Either they fall over on the fiction writing, painfully lathering on the facts and writing amateurish prose, or they are so science-light that they are, in effect just straightforward hard science fiction, perhaps with a 'science behind the story' at the back. This title by Wallace Kaufman and David Deamer, I would say, is the best I've ever read in terms of achieving a balance of the two.

In the Hunt for FOXP5 we meet genetics professor Michelle Murphy and her extremely intelligent daughter Avalon (yes, really), adopted from a Kazakhstan orphanage, the way you do. In a mix of archeology, genetics and nationalist political intrigue we get a feel for how the FOXP2 gene may have resulted in human language ability distinguishing early humans from the other humanoids - and how a later single mutation, producing the (fictional) FOXP5, could result in extraordinary human intelligence. This change is something that the scientific leader of Kazakhstan wants to make a national treasure, so we end up with plenty of fun involving capture, escape and rescue attempts to give the plot action.
[Brian Clegg]

Buy The Hunt for FOXP5

Coming Out Of The Woods 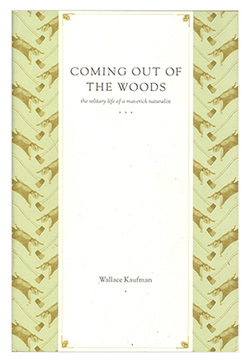 My experience leads me to believe the following advice is good for more than 99% of humankind: "Wild places are nice to visit, but you would not want to live there." After building my own house in a forest by a creek and living there ten times longer than Thoreau's two years and two months at Walden Pond, I reversed Thoreau's conclusion and propose "In Civilization is the Preservation of Wildness." I wrote this book as a friendly argument with Thoreau and with many of the friends I have from my terms as president of three statewide environmental groups. Thoreau had many visitors to his cabin, but he had none as interesting as my daughter Sylvan who not only visited but helped build and foray and garden but who grew up to become my co-author of another book.

Novelist Reynolds Price: “An absorbing, unflinching and surprisingly comic account of how one man—a devoted father—withdrew from the world and gradually returned. It’s as wise and instructive as it is compelling.”

Robert Finch, author of Death of a Hornet and Outlands: Journeys to the Outer Edges of Cape Cod ,"Coming Out of the Woods is a much needed corrective to unexamined Thoreauvianism, deliciously skewering the sanctimonious pieties that afflict too much of today's environmental and nature writing.  Wallace Kaufman is a splendid storyteller and a thoughtful social critic--wise, honest, and consistently funny."  ​
Buy Coming Out Of The Woods
​https://py.pl/AXo 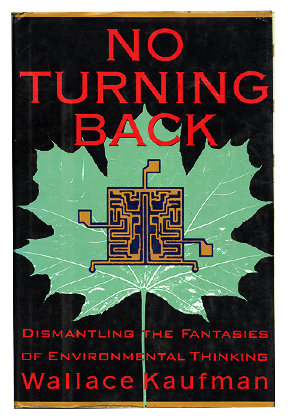 ﻿As an environmental activist and president of three statewide environmental groups, I often became aware that many of my green friends had a poor grasp of science and little interest in the broader history of conservation in America. Having put my ideas into practice in both politics and land development, I wrote this book to explain the strengths and weaknesses of the environmental movement. No Turning Back is a history of environmental thinking. That history leads to new ways to harness the energy of technology and capital to avoid disasters and improve our natural environment. Many will find uncomforting, but I believe it opens new ways of finding common ground.

Floy Lilley's Suggested Readings  “Kaufman, who has been an "insider" in leading environmentalist groups, traces the anti-scientific development of the American environmental movement from its roots in late 18th century romanticism through its modern anti-capitalist political activism. He makes a compelling case for privatist approaches to conservation and the employment of advanced, intelligent technology to natural resource management issues. Kaufman explores scientifically reasonable definitions of "nature" in light of the special place of humans and current insight into the chaotic nature of complex systems.”

Publisher’s Weekly: “Science writer and environmentalist Kaufman ( The Beaches Are Moving ) fires broadsides at the environmental movement, which, he argues, has become a religion that ignores the basic principles of science, economics and human nature.”

​A.L. Nieves; Wheaton College (IL), for American Library Assoc.: “In an age of political "correctness" Kaufman has demonstrated great courage and integrity. He has tackled a challenging and controversial topic with clarity and without the rancor one might expect given his own history in the environmental movement. Kaufman's is a solid presentation of the historical development and present position of the environmental movement with a thoroughgoing understanding of the philosophical underpinnings of its early and contemporary forms. . . . The strength of this volume lies not so much in its ability to convince as in the likelihood of its provoking a national conversation about what constitutes a legitimate national agenda. Students of history and social movements as well as those sincerely concerned with the environment will find this a fascinating, must-read volume.”

Ben W. Bolch Rhodes College, in Cato Journal. “Kaufman has written a book that deserves a wide readership among people who desire to deepen their understanding of the environmental movement.”
Buy No Turning Back
​https://py.pl/21d9WN 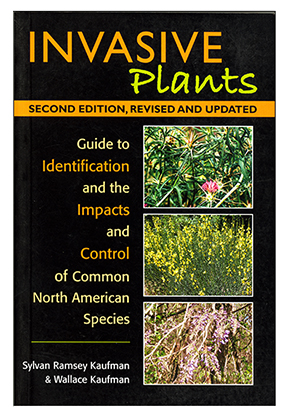 My daughter Sylvan and I spent hundreds of hours together gardening, collecting mushrooms, cooking, reading, playing music, debating, and traveling. She earned her Ph.D. at Rutgers and went on to post-doc work in invasive plants at Harvard. When I asked her in 2006 if anyone had written a guide to the invasive plants that threaten natural areas of North America, we decided to write this book together.  We agreed that instead of merely helping people name the invasives, we would include stories of their journeys and how they impact our native species.

Craig R. Allen and others, Great Plains Research, University of Nebraska. “The volume presents unique information not found in other books on invasive species, which tend to be either general case studies of a few species or technical monographs. The portions on ecosystem effects and management strategies are distinguishing characteristics of the book and especially useful. The authors have created a reference guide that is well written, easily understandable, and accessible for both scientists and amateurs.”

The Beaches are moving 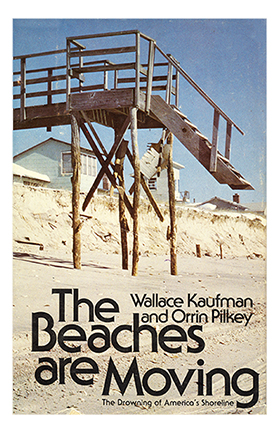 ﻿Growing up on the north shore of Long Island I spent endless hours exploring beaches and the bottom of the sea in great detail—fishing, boating, collecting fossils, snorkeling, and clamming. With co-author Orrin H. Pilkey, a coastal geologist, I wrote this book to explain both the marvels and the dangers of our beaches from Maine to Alaska and Hawaii.

Laurence Rockefeller, Natural Resources Defense Council, “The Beaches Are Moving is rich with the wisdom of historicval perspective of both human nature and geology.”

Dr. Francis P.Shepard, Scripps Institution of Oceanography. “This is an excellent piece of work that will do a great deal of good toward the preservation of our coastlines. . . It will also show the public how badly their taxes are being used by some government agencies.”
This book is a must read for anyone living near the sea. Read it once, and the foolishness of much of our zoning laws and development policies is evident.
​
Don Cates, Seattle columnist, “Here is a book that never becomes outdated.  . . .  This well informed and moderate writer is sure to baffle those on the extremes who believe you have to be one or the other.”
Buy The Beaches are Moving